Then I realized that I had forgotten one crucial last step of last June’s Fedora 24 installation to both of my desktop machines: I did not yet have not yet installed the K3b distribution-agnostic GUI DVD creation tool.  I have been using K3b since a LUGOR colleague in the Rochester N.Y. area suggested it to me as I got back into Linux circa 2006 to 2008.  I probably first used K3b for to burn a Fedora 13 or 14  DVD then while Fedora 15 to 17 in my recollecte opinion had unusable GUIs I found the eminently usable Cinnamon GUI first in Linux Mint for several Linux Mint releases.  When finally (Fedora 20?) Fedora began having the  easily installed Cinnamon GUI  option, I went back to using Fedora,  my present choice of Linux distribution.  The beauty of open source and Linux is that my key applications:  Libre Office (Writer, Calc etc) GIMP,  Thunderbird, Firefox,etc with minor cosmetic differences could care less about which Linux they run under.

This tool,  out of the Debian Linux branch, is what I used to transfer my downloaded  .iso image files onto bootable installation DVDs, the first step of the next installation after download.

So it turns out that my first step for installation of Fedora 25 was to install K3b into  Zeus, my HP Pavilion  “test” machine whiThen then, after realizing that I had forgotten to install the K3b  installing a forgotten k3b mail.t 09:50:57 s soon as it was available.

After burning my physical DVD from the image

July 8 to July 14, 2016,  Jean and I traveled to Bath, England for her participation in the International Narcotics Research Conference.  The British INRC organizers set things up so that the afternoon of July 13 was available for participants  to spend at the Stonehenge English Heritage site an hour’s tour bus trip each way from Bath.

To see a selection of images that we captured at Stonehenge, click on this link:

A Visit to Stonehenge, U.K.

Click on this link for several images we captured during our 2016 visit to Bath, UK and Jean’s attendance at the 2016 International Narcotics Research Conference in that city.   Of course, during our stay, Jean and I did a lot of walking around the city of Bath and this short aricle contains several images from the 100 or more we captured.  I wrote captions for all the images I selected to set them in context… but no extensive text about the trip.  Click the link to look at the current version of my selections.

A week after installing Fedora 24 in Thor,  it occurred to me that I could convert Zeus’s Fedora 24β to Fedora 24 Final by a simple command:

So I did…   Now both Zeus and Thor are running Fedora 24.  Of course as anyone using Fedora should do, perhaps one a week go into root mode and do a the same

dnf update to keep the system up ot date… 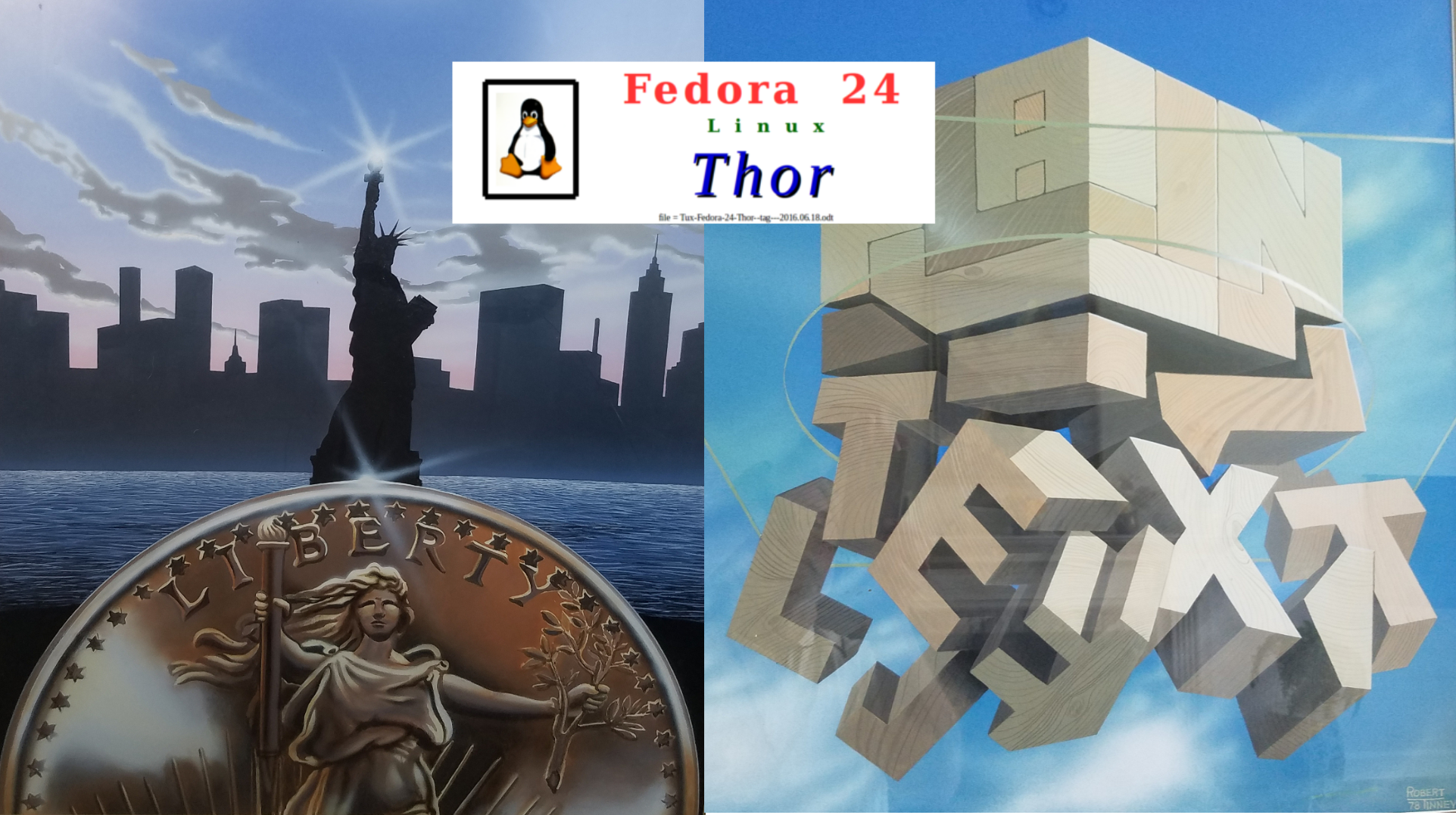 Some Linux installation setup gotchas that got me

Along about April 15, 2016 or so, I seemed to be having some initialization problems with my secondary weather / time display /  current events display computer Zeus, driving the upper of my two stacked LCD displays.  Zeus is an HP Pavilion p8620t “Core Quad” Intel PC with a 2.66Ghz clock. I purchased Zeus in December 2009 (a year before I ditched my last ancient XP computer , replaced with a much faster Thor, my current main AMD hex core computer.)

In addition to its real time weather radar, real time clock display and current weekday MarketWatch Financial DJIA & NASDAQ real time display functions,  I use Zeus as my experimental Linux computer when I want to try out some Linux distribution.  During experimental installations I temporarily  forgo use of my standard displays on the upper LCD until I have set them up again after a new installation.

In March 2016 I decided to try the latest Korora 23 version of Fedora 23.   After most of a day saving select files then installing Korora 23,  I started installing the latest version of my Perl event epoch logging programs.  This process requires superuser BASH mkdir creation of my special /home/LL/ directories with my Carl group and user name fields as well as universal rwx  permissions:

/home/LL/P/  for Perl programs and one or two BASH shells that I have written,

/home/LL/H/ for various history files created in the course of the initial boot process.

I  pipe the BASH date command into the file /home/LL/H/date-of-boot as my first BASH command after the end of the bootstrap process.   This is specified by my crontab@boot line calling my custom shell /home/LL/CH-ZeusCboot  (for my “Zeus” computer.)   In my CH-ZeusCboot BASH shell  the first command executed (absolutely minimal delay) is the BASH  date command directed to the intermediate file /home/LL/H/date-of-boot. This gives me a good approximation to the actual boot epoch (date and time) as a standard date command output.

At  an unknown and irrelevant delay time later in the CH-ZeusCboot shell, I cat the file /home/LL/H/date-of-boot into the pipe into my Perl /home/LL/P/form-history-date.pl program in order to get  an  “epoch” format date string for use in my history logs.  My “epoch” format date is a more natural readable format of date as opposed to the “format of convenience” used by the first Unix coders that resulted in the date command’s output format.   tAs an example the epoch of my login on an April 2016 morning is:  Tue Apr 19, 2016 @ 06:40:48 EDT created by cat piping the Linux date format /home/LL/H/login-date ( Tue Apr 19 06:40:48 EDT 2016 ) into a pipe into my form-history-date.pl  then into the file  /home/LL/H/epoch-of-login.  The main difference is that I move the year to its proper position in an American English expression of a date following the day of the month and I add the characters ” @” before the HH:MM:SS format 24-hour astronomical time field used by Linux.  Of course I use the effective time zone 3-digit abbreviation for Eastern Daylight time based on my New York location and the current day within the year.

Fine and dandy.   As part of this very manual configuration process, I create my default (at normal shutdown) Firefox windows pointing at various on line nuggets:

http://bigcharts.marketwatch.com/… for DJIA and NASDAQ stock market charts when markets are open.

While creating my non standard directories, as well as developing some further “.pl” perl programs I had to make the new program files executable — whether the files were simple shell script text files or .pl perl programs.

Out of bad non-GUI habits command line habits I used a BASH shell window rather than the GUI file properties window to mark the new program files as “executable” so I could run them.   After I had a shell window activated for other purposes,  for some reason I used the screenshot GUI tool.  I inadvertently left it in the default “grab the whole screen” mode while taking my screenshot.  Well the whole screen includes my usual desktop background as well as my terminal window and Firefox browser windows.

Remember,  a screenshot of a terminal window looks just like an active working terminal window.   The …/Pictures/ directory happens to be the default directory from which to select desktop backgrounds as well as the default destination directory for the Screenshot application. Compound that with my inadvertent selection of the abnormal screenshot as my desktop background when I was configuring Korora 23 Cinnamon in Zeus.  Now I know why I ended up with a “frozen” terminal window that just would not close when I clicked its “X” dot in the upper right corner!

By going back to preferences I found that my options included my intended custom desktop background for the Korora 23 distribution without the terminal window image, as well as the inadvertent potential wallpaper image of my screenshot with the BASH GUI window and similarly frozen images of my weather and time windows.  Picking the correct image I solved my problem.  So now I know yet another potential gotcha of the occasional installation of a Linux, an act that I do not do every day!   Some details are worth cluttering into one’s memory rather than being tossed over the transom when using the system normally for weeks or months after the last installation!

Not bad for a morning’s writing about my latest finds.    …Carl Helmers

In order to read my article,  simply click on the following hyperlink to a PDF of my article, last  update (a link change) April 11, 2016…

On April 10-11, I discovered some archived 2013 photos and wrote an important addition to my article on how Dole Bananas get from Costa Rica to our local Wegmans supermarket.

Pay no attention to the redundant title line above. Please press this ultimate link to read my story: